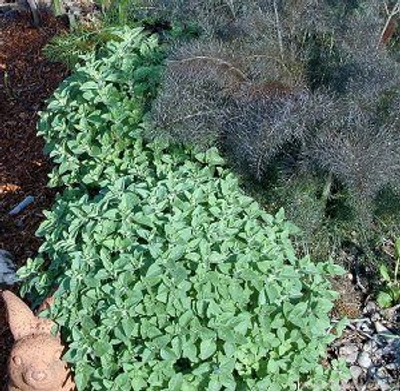 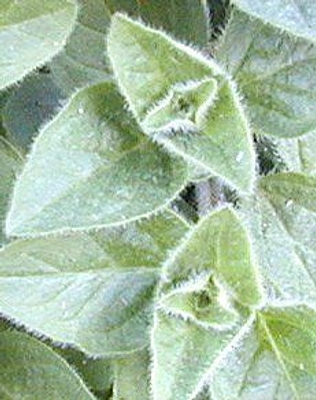 In the 1940’s, a lot of interest in foreign cuisine was generated by the soldiers who returned home from the war. They had experienced different foods that were spicier, and, yes, even more flavorful than Mom’s pot roast. True, there were some ethnic groups at that time who grew some spicy Oreganos, but most of us didn’t have a clue.

Unfortunately, when we did start growing Oregano in our gardens, it often took over, invading our herb gardens, our lawns, and our flower beds. Even worse, it had no flavor except that of grass. The seeds we were sowing were easily collected from the wilds of the Mediterranean where Oregano covered the mountains (Oregano, loosely interpreted from the Greek, means Joy of the Mountain). This rampantly growing plant is what we now refer to as Wild Marjoram. It has a pink flower which is great as a dried flower, but even so, there are much better behaved ornamental Oreganos to grow for flower arranging. Like Wild Marjoram, they also have no flavor. Eventually, a flavorful sub species of this Wild Marjoram made its way to America from Greece; and, quite naturally, we called it Greek Oregano. Originally given the botanical name of Origanum heracleoticum, its correct botanic handle now is Origanum vulgare hirtum. Origanum vulgare is the botanic name for the Wild Marjoram with the pink flower and no flavor. So our tasty Greek Oregano is a wild child (hybrid) of the flavorless Wild Marjoram. Hirtum means hairy, which helps to distinguish it from Wild Marjoram, as long as you have the two side by side.

Fortunately, there is an easier way to tell which is which: just taste them. About 15 years ago, I was giving an interview to a magazine writer and I told her that Greek Oregano is so spicy that fresh leaves numb the end of your tongue. She liked that and used it in her magazine. It must have struck a true note with many, because I see that descriptive phrase used often to describe this plant. If you purchase your Oregano at a nursery, rub the leaf, if you don’t get a wonderful waft of fragrance, put it back.

Those little hairs on the plant’s leaves and stems are an indicator of what the climate is like in its home town. The hairs provide shade for the plant and slow down transpiration (or water loss) from the plant. This allows the plant to survive some pretty hot, dry weather. The more of these little shade providers, the grayer the plant. That is why many gray leaved plants are tops on drought tolerant lists.

Conversely, these plants can be difficult to grow in areas of heat and humidity or excessive winter rain. Humidity can be dealt with somewhat by planting in raised beds or containers and by giving the plants plenty of space between them for air to circulate. Well drained soil will help during periods of excessive rain, and raised beds filled with organic topsoil and compost are good for this also. Anywhere puddles form after a rain is probably not a great place for Greek Oregano. And, like most herbs, at least six hours of sun is preferable to fully develop those mouth watering flavors. In hot summer areas, late afternoon shade can cut down on watering and stress to the plant. And mulching is always a good practice to improve the soil and help keep root zone temperatures moderate. Any stress a plant goes through, such as parching and watering and parching and watering, will invite insects and disease.

Greek Oregano, like other members of the Lamiaceae family, most notably Mint, has two growth phases. The first occurs as the plant awakens from its winter dormancy. The soft tender shoots push up from the ground and reach eagerly for the sun; they continue upwards for a month so and then begin making flower heads. By the first of summer, they will be in full flower. The flowers of Greek Oregano and other culinary oreganos are white and fairly unexciting. Some culinary Oreganos, like Italian, Sicilian and Cretan, have flowers that can be used for crafts such as herbal wreaths. These plants have a smaller, waxier leaves on the flower stem that hold up better than the hairy, soft leaves of Greek Oregano when dried. They also have tighter flower heads that hold up better when dried. Cutting the plant’s stems often will discourage flowering and encourage fresh growth and bushiness. Plants can be cut back to within two inches of the ground when harvesting or maintaining the garden, usually at least twice a year in our long growing season. When a plant is flowering, it is not making new leaves and the pickings can become slimmer and less flavorful.

Around the middle of summer, the plant decides it has made enough flowers and begins its second phase of growth. This is a lateral growth that allows the plant to increase in diameter. It will also continue to grow upward. Giving the plant soft loose soil to spread into will encourage the runners to seek new ground.

Greek Oregano has a strong flavor but it doesn’t hold up well to prolonged cooking, especially when used fresh. Harvest fresh leaves right before you are going to use them. Wash them and pat them dry. If you are harvesting several hours ahead of time, wash them, pat them dry, and wrap in dry paper towels and refrigerate. They will keep a few hours this way. Or whole stems can be placed in a glass or, even better, an attractive vase of water. This is a fun way to prepare for a meal. Pick several kinds of cooking herbs and make a culinary bouquet. Aromatic sprigs of Rosemary, Greek Oregano, Winter Savory, and Basil waiting close by will make both the creative and digestive juices flow. Greek Oregano chopped and mixed with garlic, salt, and olive oil makes a great marinade for pork, beef, or roasted potatoes. Add a little Rosemary to the marinade and use it on poultry.

Or use fresh leaves as a topping for homemade pizza (this is the way Greek Oregano was first used for pizza, not as ingredient in the sauce).

Dried Greek Oregano is a great way to get through the winter blues. It can be used for herbal marinades or can be added near the end of cooking to any tomato based sauce, saute, stir fry, or egg dish. Try a sprinkle of dried Greek Oregano on your next grilled cheese sandwich. Fresh or dried Oregano can also be combined with other herbs to make fresh crusting for pork chops, tenderloins, or chicken breasts or a try our delicious herbal marinade.

Brush the pork chops on both sides with honey. Finely chop both herbs and mix together. Coat the chops on both sides with the herbs. Salt and Pepper to taste. Place on the high rack of the broiler and sear each side for about five minutes. Lower broiler rack and continue cooking until done. This usually takes about ten minutes per side (depending on the thickness of the chops). These delicious pork chops can be made using dried herbs instead by reducing the quantity by half. They can also be cooked on a grill.

Featuring fresh herbs from YOUR garden!

IF you don’t use all of the fresh oregano and herbs you picked this morning, just lay the herbs on a paper towel to dry for another time. When substituting dried herbs for fresh herbs, one tablespoon of fresh herbs equals about one teaspoon of dried herbs.

To harvest for winter use it is easiest to dry all that will be needed at one time. Four to six weeks before the first frost, cut the herb back to about three inches above the ground. Allow the plant to regrow and then, before frost, cut long stems (6 to 8 inches), tie in small groups, and hang out of sunlight in a warm room. Check often and, when crispy dry, store whole stems in glass jars in a dark cupboard or pantry. Leaving the leaves on the stems will preserve more flavor than stripping the leaves and grinding them into a powder. Greek Oregano can also be pureed with a bit of olive oil and frozen. Freeze flat in pint size zip lock bags. Because the olive oil doesn’t freeze, sections of this frozen pesto can be easily broken off and used.

Which Culinary Oregano is right for you?

Use our flavor and intensity chart to select the Culinary Origanum most intriguing to you. Flavor is measured with 1 being close to Sweet Marjoram and 10 being close to Greek Oregano. Intensity is how it numbs your tongue, with 1 being mild and 10 being the spiciest. While Sweet Marjoram is included in our table, we advise that you direct seed this tender perennial; therefore, we do not offer it for sale.