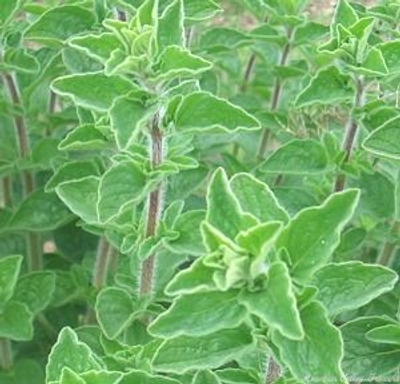 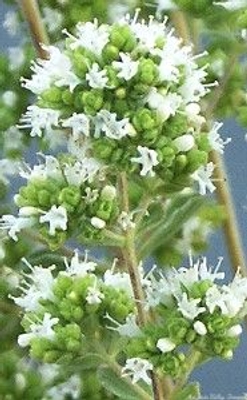 Syrian Oregano is quite attractive with soft, bright green leaves and reddish stems.

Emerging in spring this Syrian Oregano would have been much tidier had it been cut back to about an inch with a hedge trimmer.

Leaves can be harvested anytime up until the bloom has been on the branch for a while. As the leaves age, they will become a dark, dusty green and the stems will become a woody brown.

The new flower buds can also be used fresh or dried. Their flavor is very concentrated and is the perfect flourish for a grilled cheese sandwich or a bowl of creamy tomato soup.

Once the flower buds have elongated though it is best to pass them by. At this point, usually in early fall, the bush can be cut back to the ground to rest for the winter. Or, the flowers can be left on until brown so that beneficial wasps and other beneficial insects can feast on them. This does not hurt the plant and, as the flowers become totally brown, the insects no longer find them attractive. At this point the stems can also be cut back to the ground for winter.

In the Middle East, Origanum maru is often used, along with Conehead Thyme and Pink Savory, as an ingredient in the spice blend Zatar. While it is tempting to label a single herb Zatar and while, like the recipe below, a single herb may be mixed with other ingredients, Zatar is an herb and spice blend. The herbs in the mix vary from region to region, similar to curry. Zatar is often spread on bread or pita with a little olive oil and baked something like an herbal pizza.

In a small bowl add the first five ingredients and stir together to combine. Seal in a glass jar and store out of the light. Makes about 2/3 cup.

Brush pita with olive oil and sprinkle with Zatar and warm in the oven. Or mix equal parts Zatar and Olive Oil and spread over bread and then warm.

Since Syrian Oregano is one of our most flavorful oreganos, we developed a special recipe for it and the delightfully tasty Italian Oregano Thyme.

Brush the pork chops on both sides with honey. Finely chop both herbs and mix together. Coat the chops on both sides with the herbs. Salt and Pepper to taste. Place on the high rack of the broiler and sear each side for about five minutes. Lower broiler rack and continue cooking until done. This usually takes about ten minutes per side (depending on the thickness of the chops). These delicious pork chops can be made using dried herbs instead by reducing the quantity by half. They can also be cooked on a grill.

Yet another reason to grow Syrian Oregano is for its long, vibrant green flower stems. These are perfect for use in making fresh herbal wreaths or arrangements. Wreaths take a lot of stems and having a plant that produces in abundance is a definite advantage.

Because common Hyssop is not native to the Mediterranean area, much debate has ensued over which plant was referred to in the Bible as Hyssop. It may have even been several different plants used for different and varied purposes. Origanum syriacum is thought to be the true Hyssop of the Bible. A very frost tender plant, true O. syriacum is not offered for sale in this country, so we settle for a subspecies of it, O. maru—or what we refer to in the garden as Syrian Oregano. Oregano was often gathered in bunches and used as a brush or sprinkler for purification rituals. It was surely enjoyed then, as it is today, for its excellent flavor.

Syrian Oregano, also known as Bible Hyssop, is one of the six plants chosen to be in our Biblical Herb Garden Six Pack.

This plant is sometimes available in plug trays. These trays hold 128 of all the same plant. They are a great low cost way to fill a lot of space. Each cell is 3/4 of inch by an inch. Check here to see if Syrian Oregano Plug Trays are available.