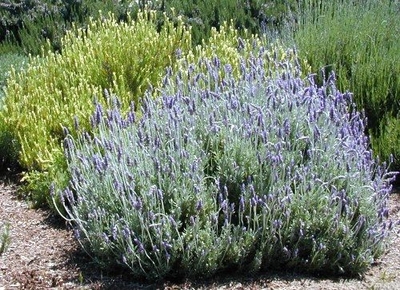 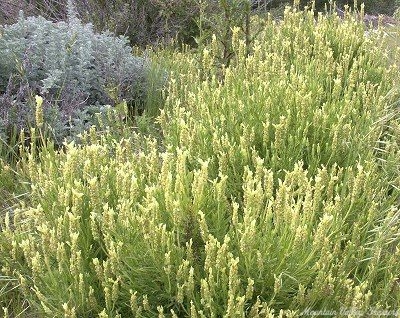 Yellow Lavender is sometimes referred to as green lavender and has been documented back to the 17th century. Thought to originate in the Portuguese archipelago Madeira, Yellow Lavender prefers warm summers and mild winters.

Even though extremely drought tolerant, keeping the plant properly hydrated keeps branches from dying out. Like all lavenders, Yellow Lavender should be pruned by at least a third after it blooms in early summer. This helps to maintain a tidier appearance.

Yellow Lavender can be used to cook with. Robert Kourik writes in his book, The Lavender Garden, that he feels it is the best of all lavenders for grilling, herb breads and hearty dishes. Its piney aroma translates into a rosemary flavor with a hint of sweetness.

This plant is sometimes available in plug trays. These trays hold 128 of all the same plant. They are a great low cost way to fill a lot of space. Each cell is 3/4 of inch by an inch. Check here to see if Yellow Lavender Plug Trays are available.